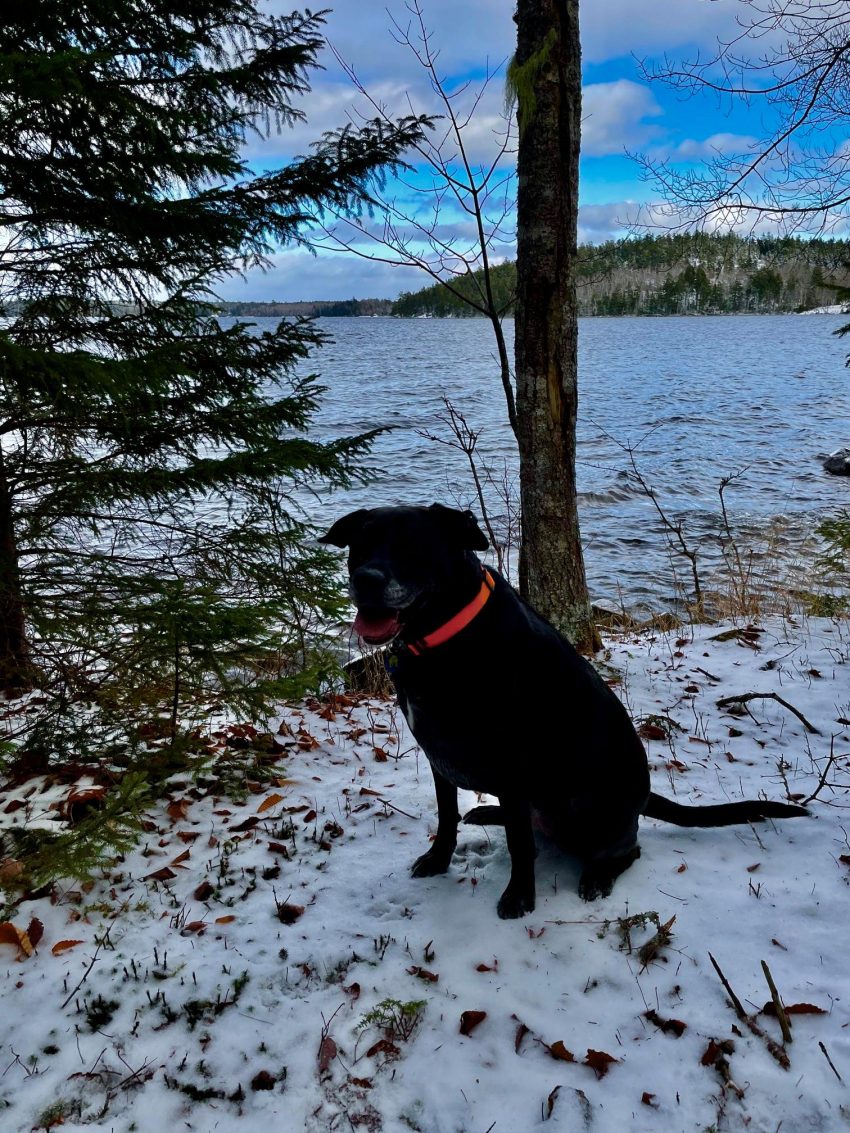 I really only went to camp for the mental health of Ellie.
Well, Ellie AND a bowl of haddock chowder at Helen’s Restaurant
in Machias, Maine.
The plan was simple. Make it safely down the snow covered roads to camp and look for trees that have been taken out by recent windstorms. Start the chainsaw, cut the trees up into managable chunks, return to Bangor. We didn’t need a written agenda to know where we would eat. Sammy (co-pilot) was up for the mission.
I sent a message to an inside contact at the restaurant last week. Winter hours are not the same as the summer hours on the homefront of “home cooked” on the frozen and jagged edge of America. It’s good to double check the hours of operation after winter settles in. Their hours fell well within the parameters of my travel plans.
Additionally, the viral conundrum must be taken into account when determining where—and what time— you will consume uneccessary calories when on a intrastate road trip through Maine. The governmentally-mandated rules that restaurants are operating under right now can change in a flash. It’s a sad state of confusion for them, and, subsequently their customers.
*drag out soapbox, stand upon it*
It’s difficult to make a living in Maine as it is. Try running a restaurant or any other small business. It’s tough. And like all Americans, this past year has been more than they bargained for.
*return soapbox to corner to be used on another day*
Meal prep at the cabin would have caused me to hump in more stuff than a chainsaw, a dog, and a peanut gallery. And it’s not like I need an excuse to have a bowl of chowder instead of my own cooking.
My co-pilot, chief mechanic, and camera shy dining partner ordered fried clams. We determined through testing that they were the best we have had in a long, long time. And, my friends, we have eaten a lot of clams in our “long, long” time.
Back to Ellie. She was elated to head out for a ride. Once you mention the trigger words, she spools up like a fur-covered turbo and she doesn’t mellow-out until the mission is well underway. She needs to see—for herself— through the windows smeared with her personal dog-snoz that we are passing landmarks that prove you are driving toward her happy places; she still won’t sleep.
The glee that she sheds through the exuberant tail whacking against the walls, counters, and the interior of a motor vehicle is enough to drive you mad, but I understand. It’s good to get out in the winter.
I was surprised to find very few trees toppled by recent 70mph gusts. Actually, only one that needs to be removed. It’s a bit of a widow-maker, and it’s on my neighbor’s property. It calls for a little more than a saw and a hungry old man to remove from it’s perch. A chain and a tractor come to mind, and I had exactly none of these things with me.
I determined to let Ellie run in the snow, check for intrusive gray mammals in the interior of the camp, and check under the boat cover for uninvited carpetbagging red squirrels. None were found. Cloth bags of peppermint and something else that stinks—to them—appears to be keeping them at bay.
Do not let your guard down when it comes to red squirrels. They have an organized union-like structure, they refuse to limit the size of their families, and they have no regard for your personal property. Fight one, and you fight them all. I choose the latter when they move into buildings. It’s like trying to clear out nut-eating terrorists.
Ellie pulled a hammy while running on the ice covered snow, so she finally slowed down enough for her winter portrait. Air temperature was about twenty-five degrees (in the sun) but the wind made it bite. Still, a nice day to stroll.
The lack of really cold temps and heavy winds has left the lake open. It’ll freeze over soon, we hope. Ice fishing season can be a bust when you have to swim, and subsequently sing—in a higher pitch—for your supper.
Have a great weekend.
TC
&
Ellie.