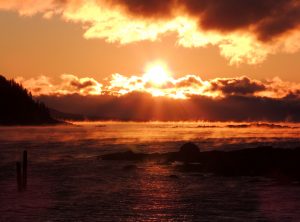 I stood back. COVID, you know.

He was clad in wrinkled Khakis, a cracked brown faux leather alligator belt with a tarnished buckle, and old shoes; his coat looked like it was warm.

The silver metal-framed eyeglasses showed signs of unsuccessful attempts at home repair. Tape filled the gaps where bending— one too many times— caused weakness in the structure. The lenses were visibly scratched.

New eyeglasses are expensive. I hadn’t thought too much about it right up until then. I needed to replace my own. The lenses are scratched, but the scene was clear to me as I stood there.

Each morning, when I pick up the glasses from wherever I thought that I lost them the night before, I can see the scratches.

Once they settle in on the bridge of my nose, my eyes automatically make the necessary accommodations, and the view through the glasses is fine for another day.

I bet he feels the same way. The adage that “this (or these) works just fine” was probably one of his mantras.

Even as I describe him, I would say he brought the whole ensemble together nicely. The sum of our parts, even when well worn, can still have an overall pleasant appearance. He had pulled it off.

He looked at the pastries, then he asked about the chocolate brownies. He was bent over peering right at them. They were huge.

He put his finger on the glass, pointing at one. It didn’t appear that anyone was paying attention to him. It was more than likely because the place was so busy. The man’s finger-pointing was all a part of his decision-making process. No one was waiting for him at home. I could tell.

He moved his finger up the rounded glass display case. Dragging it along the radius of the smooth protective shield, he settled on one of the cakes. It was about three rows back from the front. That’s the one I would have selected as well. It was a bit bigger than the others. He looked down his finger as if he were setting up the sights on a rifle for the perfect shot. His quarry was selected.

I’m a pretty good judge of age, but I didn’t try to guess his. I was too busy trying to figure out exactly why this brownie, this post-dinner delight, was so important to him.

And, yes, he was holding up the line. I stopped being worried if my pick-up order was getting cold when I started watching him.

Internally, I had hoped he would stay all day. I was rooting for him. I wanted that brownie to be the best one that he ever tasted.

When the busy lady at the counter turned her attention toward him, he pulled the trigger. His finger stayed right on the glass. He aimed it well enough that she was able to select—and pluck— his brownie right out of the case. “That’s the one,” he said.

He paralleled her walk down the counter to the cash register. He didn’t get there as fast as she did. It took him a while to straighten up, get out his tattered wallet, and select a few dollars from between the scraps of paper he was saving inside the compartment.

He knew the cost, and he presented her his cash. She bagged it up and placed it on the counter.

He grasped the bag only after reconfiguring the papers that tried to come out of his wallet when he retrieved the dollar bills. The wallet slid easily into the back pocket of his baggy khakis.

He said, “I wonder if it will be as good as the brownies my mother used to make.” And with that, he slowly walked out in the bright sunshine of another brisk January day.

I mentally crossed my fingers that the brownie would hit the spot. I knew it wouldn’t. It’s hard to hit that target when it’s so far behind you.

The clearest picture sometimes demands that we stand back for a time. COVID, you know.