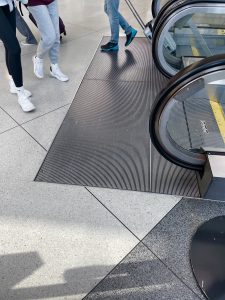 I could have charged the wireless headphones a bit longer, but I didn’t. The Air Pods were fully operational during the early morning flight out of Pittsburgh, but they gave out soon after I landed in Charlotte, North Carolina. I could have taken an opportunity to pull out a pair of wired headphones that I carry as spares, but I didn’t feel like digging into the bottom of my carry-on gear bag.

I didn’t want to slow down the progress of finding my next gate, so I kept moving along. Whenever I am at an unfamiliar airport, no matter how much time I have between flights, I first try to find the gate from whence I will depart. When your final destination is a tiny town on the far edge of the continent, they don’t send you home on a big jet from the large terminal; that’s a fact. You are relegated to the far reaches of the rambling buildings to wait for the value-sized airplane options.

The rectangular plastic case that recharges the tiny headphones appeared to have enough residual juice to give the pods the boost that would be needed to get me through the upcoming flight back into Bangor International. I put the miraculous miniaturized melodious devices to bed in their minuscule compartments, shut the lid, and then threw them back into my pocket. I wanted them to wake up— refreshed— after a couple of hours while their owner wandered and wondered. I found my gate, and then I went back into the larger terminal to find a cup of coffee and a spot to stare.

After jockeying myself into a crevice between a huge janitorial cart and one of the big trash cans that open up electronically when beckoned by the garbage-filled hand of a human, I leaned against a sun-warmed plate glass window. My spot was wide enough for only one body, and I certainly filled it to capacity. The coffee was remarkably good.

I wanted the space to be comfortable but not large enough to invite the invasion of another weary traveler with a penchant for leaning and observing. I crossed my fingers, hopeful that the janitors had completed their tasks or that they were on a long lunch break in another distant area of the terminal. My comfortable cocoon was dependent on keeping the cart stationary as it was my northern boundary; I crossed my fingers that the lazy leaning upended mops would have the capacity to cover my six.

The impromptu observation post was located at an exit—and an entry— of two of the moving walkways that allow humans to pose as George Jetson when he is delivered from his flying car to his desk during the opening credits from the Saturday morning cartoon. Moving walkways allow you to walk— or stand— and still make pretty good time as you are delivered to the future. The theme song for the Jetsons played in my head (just like it is playing in yours). Soon, the steady hum coming from beneath the conveyer of citizenry washed away the jazzy brass-centric ditty, and I began to listen to the resonations from the terminal.

Without the headphones plugged into my ear pans, I focused on the sound of the hundreds of various-sized plastic wheels rolling—sometimes skidding— across the floor of the impressively clean and grit-free concourse. To my right, I could hear the oncoming rollers clickity-clacking their way toward me on the moving corduroy-steel walkway. Thip, thip, thip, screech, drag, and repeat. The parade had no beginning and no end.

Soon, I began to focus on the retreating sounds of other wheeled and weary warriors as they wrestled with the worry that they might miss a flight. I have felt their worry, and I sensed the whispering voices belting out a ballad of angst inside of their heads as they sought to locate the gate that flaunted their flight number. Some moved faster than others, and some lugged their gear at a snail’s pace. The latter were either early or, possibly, just confident in their necessary terminal velocity.

The sun was warm on my back as I tried to mix—only in my mind— the master track of the hundreds of wheels rolling to and from their destinations. Focusing on specific singular sounds allows the mental elimination of so many others. I blocked out the mobile conversations, the announcements, and the pleasant warnings on how we should avoid becoming the caretaker of someone else’s luggage. Thumping, clicking, and ticking created a cadence broken only by the sound of an occasional wheel with a flat spot—or a bad bearing— skidding along through the terminal.

Spellbound by the inbound and outbound sounds of people moving their belongings to unknown destinations kept me entertained for well over forty-five minutes. It was enough time to watch the line dissipate at the taco take-out joint located just a short jaunt across the concrete divide. I broke down and checked the reviews for this taqueria on Yelp. While searching, my mind drifted to inner-voice mode and it mentioned that the name—Yelp—rhymed with help, and for a moment I considered that “Help” might be a better choice for a moniker. I reconsidered dropping them a note due to the fact that I read somewhere that the developer is a millionaire, and I am not. Yelp works just fine

I ciphered time-to-flight calculations using old math, an analog watch, and one finger to scroll through two-star reviews. This led me to make the scientifically informed decision to wait until I got back to Bangor to eat less than appealing foods in the comfort of my own home.

It was apparent from my scan of Internet opinions that the guacamole— hidden within the walls of the faux stucco exterior— could make a rough flight far less than tolerable.

My headphones had recharged enough to return to my music. Un-played tunes remained on the download of my eclectic blend when the pitifully powered pods pooched out and thus were preempted by the clattering cacophony of rolling plastic wheels and the unknown voices from speakers echoing invisibly in the rafters above.

My electronic mix-tape of Bruce Hornsby, Van Morrison, The Eagles, Lou Rawls, Thomas Rhett, and James Taylor blocked out the world around me from that point on. I sauntered down the concrete causeway toward my gate. I was relieved that I skipped the tacos.

It was clear that I would arrive at my gate in plenty of time for random ruminations, and I was more than pleased that the enhanced noise-canceling capabilities of the rejuvenated headphones kept the sound of my own wheels from driving me crazy.

Thanks for taking time out of your day to read the stuff. Thanks for those of you who have made donations to the platform’s funding source, and thanks for the support.  Share the writings through your own social media channels and we can head toward fourteen-thousand subscribers, but only with your help. I appreciate it.