Tonight, I began to wonder when Ellie transitioned from young to old. 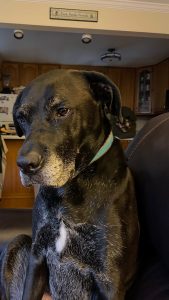 Her frosted tips have taken to spreading around a bit. I first saw the gray in her muzzle, then in her eyebrows. Suddenly, the silver highlights were everywhere.

At night, she sits beside me on the couch. Sometimes, remaining completely still and staring for over an hour. She can sleep while sitting up, and she does it quite regularly. It’s odd to have a dog looking over your shoulder when you are writing, but she never speaks to me about grammatical errors. I can deal with her choice of seating positions.

The way she plants herself on the couch makes me laugh. I think that’s why we stay together. Her mom was a pure boxer dog and spent much of her time sitting with her master—upright—in a chair in their mid-coast farmhouse living room. Ellie must come by the strange positioning naturally.

Her dad was a chocolate lab whose hobbies included more amatory pursuits. He was able to lift the latch of the door to mom’s room— with his snout— when the time came to consummate their illicit love affair. Ellie is the product of a burglary, if you consider breaking and entering to be a crime worthy of charging as a felony.

When I selected her from the way-back of a Volvo 240 wagon, her pet-mom advised me that she didn’t want to take any money for her. She had advertised the Box-a-dor puppies for the sum of two-hundred-and-fifty dollars. She said she would refund the entire sum when I provided to her the medical records proving that Ellie had been spayed. I paid her the money but never asked for a refund once Ellie had her procedure.

Ellie held a lot of promise. Initially, I felt she was far more trainable. I mean, she’s trainable, but I am not patient enough to get by her stubborn streak. I suppose I’m not all that trainable. We stuck with the basics. Come when I call, don’t poop in the house, get off the bed when I tell you to, don’t bite the pleasant people who stop by the house or camp. Oh, and guard the truck so that I can leave tools and things lying around on the seats while forgetting to put the windows up when I go in some joint for coffee and pie.

She’s been a stellar performer. Oh, she does other things- sits, stays, shakes, and catches snacks like a boss. I only wanted a dog to be a dog. She’s got it down, pat. Sure, I have to beep the horn of the truck—sometimes—to get her to come back from her walkabouts at the lake. Usually I slam the door a couple of times before reaching for the horn. The sound of doors will usually bring her in if she is within shouting distance. Yes, it does cause you to shake your head in wonder when shouting her name didnt work in the first place; I know I can holler louder than the sound of a door slamming.

One of her annoying traits is that she peeps. She cries really. Whenever there is some urgent and unknown angst, she whimpers, peeps, cries, and moans. Her noises can be incredibly off-putting, but what are you going to do? We all have flaws.

When she is in, she wants to be out. When she is resting, she’d rather be running, and when she’s eating, don’t get between her and the bowl.

When she growls, listen to her. When she stares and groans in unison, it’s time to go outside. She is incredibly proud of her record of NEVER having an accident inside the house, not even one time since showing up when she was only eight weeks old. That’s six years of savings in paper towels alone.

A few weeks ago, Ellie came up lame after four straight hours of playing with an energetic five-month-old puppy. She limped for a day, but she came out of it. Telling her to slow down would be useless, and she is too stubborn to recall that she is not a puppy anymore.

I guess the key to making her slow down is to model the behavior for her. I’ll just sit on the couch and write some stuff.  She will  sit and stare. Tonight, she’s probably wondering when I transitioned from young to old.

Thanks for swinging by the writing page. Thanks for your support. Please make sure you have clicked the FOLLOW button on my Facebook page if you haven’t already.

Keep your hands to yourself, leave other people’s things alone, and be kind to one another.