While I don’t want this blog to turn into a sounding board for outhouse discussions only, last week was flush with various non-potable moments.

I enjoyed so many of the comments from all over the globe, and many of you shared your own outhouse memories. It seems a high percentage of the readers have had opportunities to leave a warm bed and find some comfort on a cold seat in the forest. We are more alike than we are different.

As the week progressed, I noted during one fishing expedition that my good neighbors on the peninsula of Cottage Cove had returned to their summer place for a long weekend. As I motored by, while avoiding the creation of an annoying wake, Paul appeared on his dock. Like a tall, bearded apparition. Poof, he was there.

It was an indicator that we needed to discuss something. Paul didn’t need to wave me over. If a lakeside neighbor walks to the end of their dock while you are floating by, you stop. It is written the rulebook of cottage etiquette. Look it up.

I surmised that we might need to talk about the upcoming annual meeting of our road/land association. The yearly repair of roads is a big deal in the woods. I was wrong.

After some small talk about smallmouth bass, Shirley’s dog, and fried perch, he popped the question.

“Do you still have your tractor here?”
TC-“Sure do.”
Paul-“Do you want to help me with a dirty job?”
TC-“No, but what is it?”
“I need to clean out the outhouse, but I only need you to help me lift it up. While we don’t utilize it much, it’s been ten years or more.”

Since this camp-bound duo also have a modern restroom within the confines of their walls, the outhouse is only a standby in case of an overflow of family and friends. 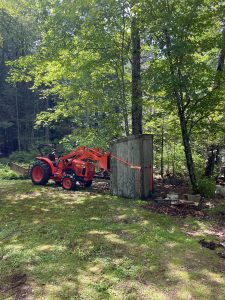 I’d done this before, a couple of times. I utilized a come-a-long, and a block and tackle, to remove my last outhouse before the new one took its place. 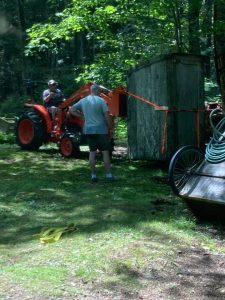 Paul said that he had an idea. He would strap the outhouse to my bucket loader, and all I needed to do was lift and back it off the ancient foundation. It sounded easy for me. I just had to operate the tractor.

Paul wouldn’t have expected me to dig out his family heirlooms. But, to be honest, if he had demanded some help, I would have pitched in. I’d have merely requested the use of one of his long-handled spades, naturally.

“Sure,” I said. “I’ll be over later. I can move it and leave it attached to the tractor until you complete your tasks.” I had already regraded my road after the deluge of rain washed most of it down the hill. “It’s a date.”

A couple of hours later, I drove through an old shortcut and ended up on Paul’s long and winding road. When I pulled in, Paul had his equipment ready. Two straps, a couple of strategically placed braces, and we lifted that one hundred (plus) year old rustic bathroom into the air. I pulled it back and set it on the ground. I went to supper, and I assume Paul did not.

The following day, I returned to finish up my portion of OPR (Operation Potty Rejuvenation). Paul had taken care of his business. The hole looked like new. He determined that it was good for another ten years, and you never have to jiggle the handle.

I was pleased to discover that I hadn’t even disturbed the artwork on the walls of my friend’s palace of poo. Later, Shirley advised me that she had already taken the drawings from the walls before my artful movements. No pun intended. I took a photo of the tandem potty seats.

No, this specific set of black and white throne covers were not inspired by the lyrics from McCartney and Wonder’s “Ebony and Ivory.” But the song was about getting along with all people as we are in this together. The tune was critically reviewed for its overly simplistic view of the world. Yes, these “keys” are side by side, but that’s certainly no piano keyboard.

While one can assume a few tunes were played out in this venue over the last one-hundred-years, it’s not a stretch to say that none of them were Grammy-worthy. Unless some of the users were actual Grammys. I just don’t know.

Strange how some song lyrics can be utilized to describe something that was never intended by the writer. You just have to go through each verse—line by line—to find something that fits.

“We all know that people are the same whereever you go
There is good and bad in ev’ryone
We learn to live, when we learn to give
each other what we need to survive, together alive”- (Lyrics by Paul McCartney 1982)

It appears that the dueling users should be well-acquainted before settling in, because they certainly will be overly-familiar afterward. You could definitely be rubbing more than elbows in this lovely meeting spot. Learning to share the same roll of TP builds a bond that cannot be broken.

*Thanks, everyone, for reading the Newslog. Thanks for taking the time to comment and share. For those of you who haved supported my writing through the BuyMeACoffee app, Thank YOU! Make sure that you pre-order my new book from your favorite bookstore. “Got Warrants” comes out October first, but pre-orders help us gauge the needed numbers for printing. It’s gonna be great. Perfect to leave between the seats at your own two-holer.*