The current situation in the blogosphere is hazy with the chance of random thoughts, possibly a shower before I go to bed.

I haven’t seen all my sisters—in the same space—for a ridiculous amount of time. I think it was for my parent’s sixtieth anniversary. This week, we all celebrated their 64th.

Two of my sisters live i 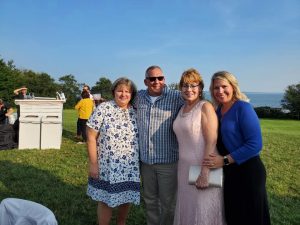 n the deep south, and one dwells on an island just off the coast of Maine in the Atlantic Ocean. Of course, it’s the Atlantic. It’s the only ocean pounding against the jagged edge of this side of America.

Thanks to the gathering for my lovely niece’s wedding, I’ve seen them all over the last ten days. Two of them for a few minutes each night this week. It’s been a pleasant chance to reconnect.

I’ve never written about it, but I should tell you that my mom and my dad live on the same property that I do. I wouldn’t say I am their caretaker, but I’m here, next door, to take care of the things they cannot. My standing joke is that their apartment is a bit larger than my house. They have three bedrooms, while I only have two. I don’t need more, of course. My mom’s theory is that my side of the joint is still bigger; you don’t argue with your mother.

Years ago, we determined that if I was going to be driving to their house and plowing the yard, pulling snow off the roof, and fixing the television when there was some confusion about the stupid buttons on the remote, that I might as well be closer. I am sure that there are times they have cursed the decision. Especially on the nights when I come home late and slam truck tailgates in the dooryard, or ask them to let Ellie out because I have somewhere to go after work, or because I listen to Lou Rawls a bit too loud very late at night, but it all works out.

Ellie likes it when they come to see her. Mom brings her biscuits in the pocket of her apron.

Kimberly has been staying on-site with Mom and Dad. Robin and her husband have been lurking at some local hotel; I don’t know which one. They come over each afternoon. It allows me to stop over and visit for a few minutes with everyone during the evening. My water-centric sister is back on her island doing her thing, but she got in on the action for a few days.

I guess all I am telling you is that I didn’t write a darn thing this week. All you get tonight are the ramblings of a man who enjoyed sitting around and talking about growing up in a pretty good place, well-loved, by some great people. It wasn’t perfect, but we thought it was. That’s really all that matters.