A post-workday shopping excursion in the middle of the 2021 back-to-school buyer binge was dumb, but I was dumber.

The thing is, I could have ordered the necessities from an online source, but I’m about to make a trip out of state with my pop, and I needed a couple of things sooner than even the quickest shipping would allow. I don’t shop much. I don’t desire to enter many establishments of commerce. It’s been like this for years, so it has nothing to do with the pandemic challenges that have befallen us. The truth of the matter is that I hate to shop.

I was a tad glum when I walked through the doors, and I made my way to the aisles of my discontent. They had been ravaged by the hordes long before my arrival.

It was apparent that Norsemen with horned helmets and a penchant for writing instruments had recently led the charge through the stationery aisle, and they wanted all the pens. I merely passed through the area where no package was left unturned.

I was overwhelmed with sad feelings for those who must restock, but I felt they might have fled the area in terror when they observed the longboats disguised as minivans and Suburbans beach themselves outside, just before the invaders came for all of it.

There were packages on the floor and strewn all over the darn place. Thankfully, the item I needed was still in stock. I picked it up and made my way to the overwhelmed cashiers who were slowly eliminating the invaders one by one. Some had coupons.

In the line, I was but one man, with one item, in a sea of shopping carts that overflowed with lovely things. I stood, trying not to make eye contact with those who were loading loot. The man in front of me— dapperly dressed and topping it all off with a nice-looking tweed cap— seemed out of place, much like I was.

He turned, made eye contact, and then smiled at me. He towered over me by at least six inches, and I looked up at him and smiled right back.

I don’t typically talk to people in line, but his demeanor demanded it. Maybe it was his hat. I can’t say for sure. I’d seen hats like it in on of my favorite books of all time. “Go dog. Go!” by P.D. Eastman.

“This is something, eh,” I said, as I surveyed the crowds. 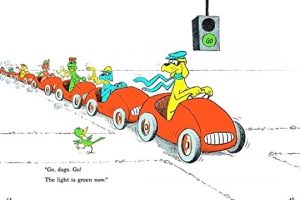 “No, man, I couldn’t. You’ve been here a few minutes. But, I will remember you as the kind man who made a very nice gesture; I’ll do my time.”

He laughed and grinned with far more joviality than my comment should have invited. It made me laugh out loud. Suddenly, it was us against the Vikings and all the victims.

“The thing is, after this, I have to go to the Verizon store.” Before he finished the sentence, he began to laugh, and, in turn, so did I.

I held up the single cellular phone case that I had just picked up from the ruins near the disaster area that was the electronics section.

“That’s why I came here! I didn’t want to go back to the Verizon store!” I waved the clear protective phone case for effect.

He laughed like Santa would if only Santa were real.

I told him of my recent venture there and the subsequent signing-in that made it seem far more governmental than consumer-based. I told him that I’d waited about twenty minutes for service, but that service was good once I made it to the top of the list and got called in from the bench.

“Once you get in the electronic queue, they text you from across the room to let you know it’s your turn! You’d better call ahead and get on their list or you are gonna be waiting a while! It’s like being at the doctor’s office.”

We both laughed. The line moved forward.

His punctuation for each statement was a deep and endearing laugh. His smile was infectious, and for a few minutes, I felt that we’d be friends no matter where we met. For today, there was no time for introductions.

I walked by him and said thank you one more time. Just a minute later, he cut across to another faster-moving line when he saw an opening in the undergrowth of consumerism. Now, we were in a friendly competition. Which one of us would be served—first— by the overwhelmed cashiers?

Each time he peered over to check my progress, I would attempt a Tim Conway move and shuffle forward ever so slightly. More subdued laughter ensued. I snickered.

It was neck and neck for about two minutes, but due to his initial kindness, I completed my sale before he had finished emptying his cart onto the black conveyer belt.

As I walked by, I wished him good luck at the cellphone store. He just smiled and laughed, and, all the way home, so did I.

Have a great Thursday.

Thanks, all, for your loyalty to my blog and writings about nothing in particular. Special shout-out today for the Royal Order of Dooryard Visitors at the BuyMeACoffee app. Thank you for your monthly support for the blog page. Thanks to all of the one, two, and three-time donors. I appreciate all of you so much.

The design of the “Dog in the Dooryard” tee-shirt has been completed. With the “Got Warrants?” book coming out in just about a month, I’ve put production on hold until— at least— mid-October. I still have to figure out how to handle logistics and shipping, as I am solo in these endeavors. I’ll plan on printing one hundred, to start, and then see how those sales go. I will keep you apprised, probably here on the blog space. If I present it on the Facebook page, I am afraid I’ll never be able to keep up. Thanks for your time in reading my stuff