There’s been very little writing over the last week. Storytellers who write stories about not telling stories are —clearly— not going to be nominated for, let alone win, prestigious awards.

The only thing I’ve ever won—to date—is a 60-inch RCA projection television valued at over twelve hundred dollars. It was on a one-dollar raffle ticket, and I ultimately sold the television to a local pub after a couple of weeks of burning out my retinas.

It’s was during the mid-eighties, and my grandfather was still alive. He came by one evening for dinner and stayed for an episode of Matlock. The living room was small, and all Gramp could say was, “His head must be two feet high!”

It was a small living room, and the television had to vie for space with a wood stove and a dog named Jack who felt that the smell of burning fur was an acceptable after-dinner cordial. He commonly would shed the singed hair from his belly because of his love of wood heat. 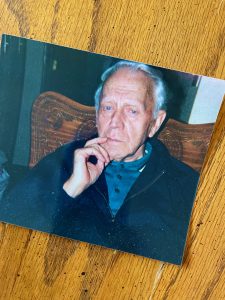 Ultimately, Gramp got into his Volkswagon van after dinner and motored home. Before he went back into the cold January night, he straightened his bolero tie and told me that I needed a bigger house or to get rid of that ridiculous television. He then pointed out that I needed to put another smoke detector in the hallway.

I couldn’t afford that house, let alone a bigger one. I sold the television, put up an extra smoke detector, and Jack continued to sleep too close to the woodstove.

I only write about the television because of a short and memory-inducing conversation with my pal from Ohio. We talk every few weeks. He finally transitioned into an iPhone, so I utilized FaceTime to reach out to him. It was his first experience with the magic of on-camera conversations. Once he took the Scotch tape off the camera so I could see him, we somehow got on the topic of that television. He lived here—in Maine—back in the day.

He said that he pulled into my driveway one night and thought the house was on fire. He claimed that a magnificent glow emanated from all of the downstairs windows.

I had no idea that the television was that memorable, but it was. Paul’s vocalized memory sparked the memory of my grandfather’s visit for dinner. I think Gramps probably came to that old house about three times in total. Each time he would inspect the chimney connections for the two Vermont Castings stoves. He’d mention that I kept my spare firewood too close to the heat, and he would push the buttons on all the smoke detectors to make sure they were actively protecting us.

Gramp was a twenty-year professional fire chief and a Nazarene minister. We miss him, but I’ve never once missed that television. I do watch Matlock re-runs from time to time, and I don’t even enjoy the show. With all the new technology and sizes available in televisions, Matlock’s always looks two feet high. Gramps was a visionary, and he knew that there had to be something better than projector televisions.

Memories are what you write about when there are no stories to tell. I hope you don’t mind.

Thanks for stopping by the page.