With autumn fading in my rearview mirror, I repacked my travel bags for whatever came next. While my travels are typically confined within the borders of Maine, there are a few nuances between summer dunnage and autumn gear bags. I’ve made the switch.

To the kid’s house, I drive about one hundred and thirty miles. To the camp? A bit over a buck. I normally sleepover at one of those two stops. It’s good to carry a few things—to be prepared— in a state known for striking changes in weather.

I carry two bags when going away for an overnight, one big and one small. Both have someone else’s initials embroidered on the side.

Yup, they came from the return racks at one of several LLBean outlet stores. The bags are both the same shade of green, waterproof, with a zippered top. They are not suitcases, just tote bags. You can save a lot of money buying good stuff that someone else— with a different name— found didn’t fit their fancy. Those screwed-up initials make it even cheaper.

Spare jeans, a couple of shirts, both tee and flannel, foundational garments (I picked up that phrase from 1960s Sears catalogs), fleece or sweatshirts, and an outer shell just in case.

The small bag carries flashlights, knives, multi-tool, chargers, a portable Bluetooth speaker, a computer, identification, and a few things that need to be toted because of my line of work. The dunnage bag can be thrown anywhere in the bed of the truck. The small one stays inside the cab for obvious reasons.

You probably wonder where the shaving kit is. So did I. I have all the stuff I need for hygiene breaks at the camp. What I don’t carry is soap or shampoo. I figure if I slide into someone else’s rain locker, there will be something to use for scrubbing. I’d be right if my daughter-in-love wasn’t such a spiffy housekeeper. The spare bathroom—typically used for baby baths—has a few toys on the edge of the tub. However, the shining shower was barren when it came to cleaning supplies for larger humans.

I had already started the shower and was in a dire state of undress when I realized there was no soap, shampoo, or something that would suffice for same. I exited the shower and began to dig, and drip, around the vanity and cupboards below. 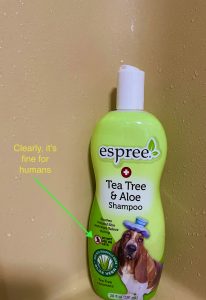 Deep under the sink, I saw a bottle of Espree Tea Tree and Aloe. I grabbed it and slipped back into the shower with nary a concern that there was a photo of a basset hound wearing a cold compress decorating the bottle. I actually didn’t notice the dog—at all—until well underway in the scrubbing process.

It really didn’t matter; the soothing tea and aloe took away all my concern about using dog shampoo. I did make sure to check the bottle for other warnings, but I waited until after rinsing and repeating. I noted that the directions only specified that the shampoo was not to be used on cats. It made no mention of me.

When I later explained to the family that I utilized some soap from under the sink, I did take some ribbing. But it’s tough to embarrass a guy who carries discount luggage emblazoned with someone else’s initials. After all, what’s good for the bassett is good for the dander.

It should be noted that I have had zero concerns about dry skin or fleas since last weekend.

Thanks for stopping by the website and Newslog. Thanks for your support for my books and the ongoing support through BuyMeACoffee. It’s much appreciated.

From the jagged edge, I remain
TC