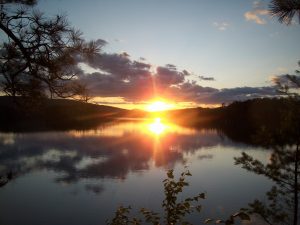 Sitting in darkness while letting the morning intrude slowly into the living room, I can watch dawn’s smiling face rise through the naked branches of that oak tree; it doesn’t belong to me. It’s on a neighboring property, but I’ve never seen anyone near it. I think of it as mine. Mine and some squirrels who appear to be lilliputian from my distant viewpoint.

Envy is the cruel and bony aunt who visits all of us. She smokes those long cigarettes, the ones that seem to burn forever and smell terrible. But I wish I owned that tree. It has lower branches just screaming for a rope swing. I’d also consider a small tree house build. But only if it were mine. No one wants to see an almost sixty-year-old man swinging in the tree in their front yard. Just the thought of it makes me laugh and feel a bit creepy at the same time.

We drive by the new homes with shiny SUVs in the yard. Carhartt clad carpenters build on the new two-story additions to the place down the road. It’s clear by the number of vent pipes sticking through the thirty-year architectural shingles that the house already has four bathrooms.

How many bathrooms can three people utilize? It’s none of my business, of course.

Some time ago, I wrote an essay that I call “Too Many Bathrooms.” It’s unpublished and an ode to how I was raised. Someday I’ll release it. I think it’s poignant, but it might cause the hackles to rise on a few folks. I don’t feel like making people mad right now. Even if it’s only a select few who might never otherwise read my words. Just for the record, our family did not have ‘too many bathrooms.’

Wandering down the hallway today—in the dark—I considered that cinnamon raisin English muffins made me feel wealthy. I purchased an eighteen pack a few weeks ago. Real butter—also a luxury that I can currently afford to enjoy—and a raisin English muffin make me feel like I’m on the fan deck of a yacht. It’s as if I am basking in the Mediterranean sun while waiting for the crew to drop the Boston Whaler off the stern so that I can go into town to pick up a few things.

The cheap Bluetooth Amazon-sourced amplifier that drives my dump-recovered Klipsch cherrywood-topped speakers makes me feel rich. Or, as my old friend Cliff used to say, “TC, it’s like farting through silk underwear!” I have never personally done that. And Cliff, a retired Navy submariner— certainly— never farted through silk. But as a twenty-something kid, I fully understood the description. It’s funny how adding the word silk to a crass little sentence can give a boy a picture of success and wealth. It did. If it offends you a bit, all the better.

When I scroll through my easily-accessed musical playlist in the early morning hours, I can’t help but contemplate the days when we had to— physically— move a needle on the turntable to hear something a bit different.

We thought nothing of getting up and walking over to the warm analog Sansui amplifier to turn it down to three. Not doing so might cause the needle to POP upon touchdown in the next groove. Listening to “Born in the USA—again—took some effort.

The Significant One came home last night. She’ll be here for an extended stay through the holidays. This morning she asked me what I wanted for Christmas. I reiterated that there’s nothing that I want. I added that if she purchases anything—at all—we’re going to have a problem.

On second thought, maybe she’ll toast me a cinnamon/raisin English muffin. I’ll grab a stick of butter out of the freezer to soften it a bit. No one wants a tear in their muffin. Not on this fan deck.

From the jagged edge of America, I remain,

Thanks for reading my stuff, thanks for your support for the books and for the website. I appreciate it. I hope you all can—at least—feel like you are wearing silk in the coming year. TC