As I continued my early morning supine supervision of the spinning bedroom ceiling fan while slightly slumbering, I listened intently for the sound of a state department of transportation truck slinging snow into driveways as it drove south to north.

I paid scant attention to the details of the forecast last night. I knew that snow would come this morning, but the forecaster wasn’t specific on the arrival time. Working to fill Ellie’s water dish without turning on the kitchen light was a mistake worthy of TikTok.

I don’t use TikTok, but I think placing the side-handled Yeti under the spout of the Keurig— bottom side up— could have only been better if accentuated while being filmed with some tuba music in the background.

The sound of rushing tap water— cascading into a stainless steel dog dish— overpowered the metered-tinkle of dark-roast coffee rejected by the bottom of a Yeti. That might sound like a wildlife proctologist’s nightmare, but it was only mine.

Whoever designed our latest electronic brewing device knew this day would come. The overflow tray beneath the mug captured all but a few splotches of the hot coffee. The blue hand towel that I eschew in favor of a cage-free roll of Bounty cleared the rest from the counter. I flicked on the light over the sink, reloaded the chamber with another cartridge, and made good on the second try. 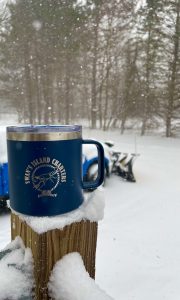 y the morning trying to edit for book number three, watching out the window for the first sign of the storm, waiting for the post office to open, and squinting hard with my left eye while trying to determine if I should have taken the eye doctor up on the progressive lenses.

You know; for close work.

The doctor had offered, but I felt that taking off the regular glasses and then squinting would make me appear more thoughtful.

Early rising seems like a good idea on a day off, but you still have to hang around waiting for your destinations to open. Snow had just started falling when I slid the key into the slot on my mailbox. I rummaged through the contents and determined that people should stop sending me mail. The water bill was the only urgent correspondence. The rest of the envelopes found themselves in the recycle bin.

Since I was too early to go to the counter to pick up a package, I left to grab some cash at the bank, but the drive-up window wasn’t open yet.

I drove around the building to access the ATM and then headed back to the post office to finish what I had started.

My trip to the warehouse club found me leaving with a four-pack of low magnification readers, fresh-baked Purdue chicken quarters, red potatoes, and more broccoli than I will be able to ingest in two lifetimes.

Ellie helped me finish a chicken leg for breakfast, and we motored off to the dump, now, more appropriately called a transfer station. I still tell the dog we are heading to ‘the dump,’ and she never corrects me. She’s an old soul, and I appreciate being able to say anything I want without a protest from a passenger.

Now the snow falls heavy on my little burgh. Wind out of the north makes its descent more of a horizontal affair. I made another cup of coffee in my new mug from Swans Island Charters. This time I made sure that it was in the cavern-up position.

The mug is a gift from my brother-in-law. And while he is much too frugal to put his business insignia on an actual Yeti, I can’t say that I blame him. They are hard to catch and even harder to hold down for a tattoo.

It’s keeping my coffee warm, and it sits nicely on the porch railing while I shovel it off for the second time today. Tonight, when this storm passes, I’ll fill up the mug again when I plow up this mess and prepare for what promises to be a beautiful Saturday on the jagged edge of America.

I’ll put on a pair of my new readers tomorrow morning before I try to fill this mug up again. A man’s got to know his limitations.