She never raises her voice, but she does become vehement regarding certain things. On her last visit to the jagged edge of America, the Significant One picked up my battered black calfskin wallet from the counter and pointed out that I needed a new one; I don’t.

She spoke loud enough for the Faceplant machine to add the word— wallet— to some electronically employed salesperson’s to-do list. I’ve found myself inundated with wallet ads ever since. 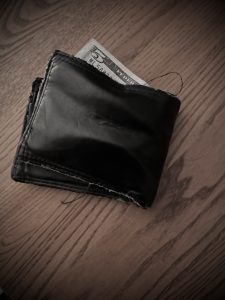 The bill-holder is a bit ragged around the edges, sure. Is it faded from the original shiny black to a more muted dark gray? Yup. However, it’s not ready to be heaved out like so much garbage. I advised her to put it down and slowly back away from the counter. She did, but not before mentioning—again—that it’s time for a new one.

It might have started as skillfully sewn calfskin with nylon lining. I’ve had it long enough for that calf to have encountered eight or nine birthdays if they had been lucky enough to experience an extended and enjoyable life. I advised her that the billfold was working quite well for me. I’m sure that no free-range nylons suffered an injury in the manufacturing process.

You see, bluntly speaking, that wallet has formed very well to my posterior region. I don’t notice it a bit when sitting down. That’s the key to a good wallet. I’ve been in the company of those who claim that their enormous, overstuffed wallet causes them back pain. Many men must remove it before sitting. That seems to fly in the face of why we carry a wallet in the first place.

I’ve noticed that many of these same individuals carry far too many keys on their keychains. Typically, the jangly mess of brass and chrome sits beside their bulbous wallet on the table while we sup. I find it odd, but I don’t judge; I do digress. I’m pleased to dwell where we feel secure enough to leave our wallets and keys right on the table in plain view of surreptitiously surly individuals.

The ads for wallets started showing up in my feed within hours and have gone on for a month. The latest has caused me concern for those who live in more populated—dare I say, urban—locales. The ad’s premise promises that if I purchase and use this wallet as directed, I will no longer fear miscreants who make their living picking the pockets of the unaware.

Back in the day, when my parents sent me off on a trip to any thriving urban center—probably to Boston for a Red Sox game—my dad told me to wrap a rubber band around my wallet to make it more difficult for smooth removal. Additionally, one extra security measure would be to park that thing in front; front pocket, that is.

In those days, I’d watch for pickpockets, probably more than I needed to; Dad spent time in some cities. He wasn’t giving me poor advice. I was relieved when freed from the bonds of pickpocketing fear after returning from a school bus trip to the big city.

The overly-advertised wallet has a unique shape like a poorly-sliced piece of pie—squared-up on one end and a half-moon shape on the other. It appears that it was sewn to allow it to hug the inner front pocket liner of a pair of Lee jeans or Khakis. The latter trouser choice, only if someone was forced to dress up— a bit— by the forces of an invitation to a marriage or, sadly, a funeral.

I’ve never had reason to be concerned about having my pocket picked. I’m in Maine; no one is ever close enough to pick my pocket. It would be odd if it happened. We don’t do crowds here, at least I don’t.

Suppose that one must be overly fearful about losing a wallet from their back pocket to the point they must purchase a uniquely shaped wallet. In that case— one might surmise— there are worries about the day-to-day security in other parts of their lives. I don’t want to live that way.

It gives me pause for thought about other people’s daily situations. This incessant ad makes me sad about where some folks have settled down and go about the business of life. Yes, I know that many can’t leave an area like that for many reasons; some of those reasons are also sad. Additionally, many live in those places because they love it; I’m happy for them.

I’m lucky to be secure in the pleasure of carrying an old wallet shaped like my posterior region. I’m a fortunate guy; that worn-out wallet merely proves my point.

Hey, thanks so much for reading my stuff. Make sure you stay connected by clickity-clicking your email address into the Get Tim’s Newslog box. The blog will show up without having to lift a finger. We will NEVER sell (or give away) your email address. That’s a promise. If you are looking for a book or two, you can check my first two at any independent bookseller, or click on the images on my webpage to find other locations where the book is readily available. If you feel that reading these mundane missives is worthy of a coffee, you can find the BuyTimACoffee button and support the blog in that manner. If you don’t, you shouldn’t. Come to read the stuff regardless. Thanks for being here.

From the Jagged Edge of the continent.