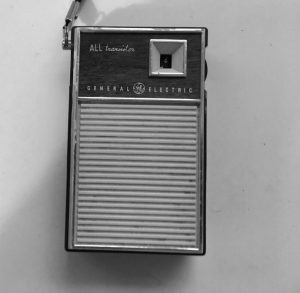 I don’t follow professional sports with any regularity. Indeed, I check the scores of Red Sox games, and I’ll listen to about any baseball game on a transistor radio.

While America had needed baseball for many summers when despair was afoot, this year is moving to the top of that list.

Yes, of course, you can still complain about salaries and the price of hot dogs, but at the same time, how many of us just had to have that fifty-inch television because the forty-seven inches just wasn’t cutting it?

Skip the new TV. It won’t make a difference; dig out an old transistor radio this summer.

Comfortable and dulcet-toned conversations fill in the quiet spots between cricket outbursts and the annual mating growls from the bullfrogs who remain unseen on the shoreline of my favorite resting place.

Quiet voices in the background while reading a book eliminate the pleasant pangs of solitude that I seek with some regularity.

Baseball games— emitting from the radio speaker— remind me of riding with my dad in the 1965 Biscayne while I formed my outstretched right hand into the frontal shape of an airplane wing when studying the flight dynamics of back road breezes.

For the sake of a warning, I also remember my left hand’s flight dynamics going into a stall after being admonished by mom.

“One young boy lost his hand by sticking it too far out the window when a tractor-trailer drove by in the opposite direction.” I still think about that kid and sometimes wonder how he progressed through life without his left paw.

These thoughts only came to me when I began to read more about the stuttering start-up of the 2022 baseball season. I got a little worried for one of my close neighbors at the camp in the woods.

I cannot share his name or the details of his life, but the Red Sox game, broadcast from a leather-wrapped, nine-volt powered transistor radio, plays a considerable part of his one week a year respite in the Maine woods. I cannot stand the thought of him missing out.

For that Fourth of July week, every summer of his fifty-plus years on earth, he eschews all things electrified and now settles in to relive a bit of his boyhood. His radio— hung from a coat hook in the cabin— is tuned only to Red Sox games. He settles down on the porch at night, seated in a wobbly wooden chair while smoking. Thinking.

I can barely hear the radio, but I can see the glow of his Winstons flickering a bit brighter than the lightning bugs who flit about the heavy summer air. The resident nuisance box-a-dor, Ellie finds her way over to push open his cabin’s creaking back screen door. The snapping closure spring doesn’t snap anymore. This leaves plenty of room for her nosy muzzle to swing the door open wide enough for the rest of her.

She checks his one-hundred-year-old kitchen for leavings and scraps and then exits through the front porch screen door when nothing can be found to snack on. Ellie sits with him for a few minutes, probably hoping for a nibble of something. I’ll holler to her to “Get back over here,” and he will yell back, “She’s fine, Tim. She’s always welcome over here.”

That’s as loud as we get in summer, just loud enough to communicate. We are not so loud that we break the calm created by the voices in the Fenway announcer’s quarters or wherever the Sox might be playing that night. Ellie eventually returns, and my friend wanders back inside to find the empty chair where his father used to sit and listen to the games on the very same radio.

I only know these things because he told me. He shared— one afternoon— that when he comes for his silent week each summer, he sees his father sitting in that living room chair when the creaking back door swings open for the first time. Of course, his father isn’t really there.

That’s why we need baseball back this summer. It’s not for me, but more for my summer neighbor. He needs to see his father. Especially this summer.

*Thanks for signing up for my Newslogs. Thanks for the overwhelming support for my first two books. Thanks to all the folks who have found the website worthy of support. We will always remain to be free for anyone, because it’s the right thing to do, but it’s because of so many gracious supporters that we can. I hope you like “Play Ball.” On (another) sidenote, it appears there was a breakthrough last night that will get baseball back on track. In these times, after the past two years, some semblence of normalcy is good medicine.