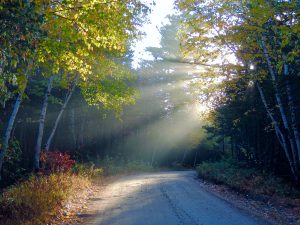 I called my friend on Wednesday. We’ve known each other since 1980 when I went to work with him at a Wendy’s Restaurant up on the Hogan Road in Bangor, Maine. We were attending different high schools, and both needed part-time jobs, but we became fast friends.

Russ is a thoughtful guy, much better at remembering things than me. We have reconnected a few times over the years, but we don’t hang around together; I’m more of a loner than I used to be. I don’t even feel bad about it; it works for me. Please don’t attempt to give me advice on how I should spend more time with people; it’s been tried before. I’m the type who likes to run into people, reconnect, and then, later, move along right after saying, “We’ve got to get together more!” We don’t, but we want to. I genuinely mean it when I say it.

I called him because while I was at church on Sunday, I didn’t see him or his wife across the auditorium like I used to. We’d wave and sometimes talk out in the parking lot after the service. I kind of lost track of him during the pandemic, back when no one was meeting in groups, not even the protestants.

Life got busy, and I missed a lot of church. Way more church than I should miss, actually. Going to church doesn’t make me a better person; it reminds me that I am not alone in striving to be one as I sit there with all the other people who think they are missing too much church. I’m still a literal pile of failure, decorated with a few successes, and I’m comfortable with that.

My S.O. is home for a while. I drove her to the cabin after the service. I needed to do some work at the neighbor’s camp. They are motoring north from the deep south this week to spend the summer in the woods. I needed to get their place in order before they arrived. I’m running late on almost all my chores. As I said, I am trying to do better.

During that ride, my sweetheart told me that Russ and his wife moved to Tennessee last year. She said that I should remember that they did. I couldn’t believe it. She then showed me the obituary of his mother. Far down in the standard surviving family announcements, I saw my friend is in Tennessee.

I called him today. I told him that I only called to apologize for missing his mom’s funeral. She was a genuine sweetheart of a lady. Always positive. She is just a wonderful woman, a champion for her two sons. I truly felt like a failure in not keeping up on things, but I needed to tell him how bad I felt about it. It was harder still to admit that I had clearly forgotten that he had moved away.

Russ told me that he called me last year on my birthday. I apparently said to him that I would call him back as I was moving my mate to her new digs in a new state, somewhere far north of Charleston, S.C. I remembered his call, but only right then. I’d never called him back.

I asked his forgiveness for all of it. He was quick to clear me of all my iniquities. We talked for an hour. I had only missed three significant life events, and he made me feel like I’d missed nothing at all.

We are going to get together more.

Thanks for stopping by and reading the stuff.

Thanks to all of you who have supported the blog. I appreciate it.