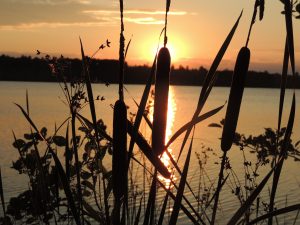 Regularly scheduled morning romps recently were reorganized to include an exit out the back door, across the creaking deck that needs staining, and down the stairs to the very same backyard where we’d end up if we went out the front door.

In essence, it’s Ellie’s urinary Ushuaia. I tend to stay on the deck because the height gives me a better vantage point to ensure she doesn’t slink away after getting rear coverage from the overgrown Rhododendron. She still hasn’t figured out how I can see her so far down on the lawn, but it won’t be long until she starts to utilize under-canopy camouflage rather than the behind variety.

I only have to make the same vocalization that I always make when she is moving beyond voice-control range, “Uh, Uh, Uh, nooooo you don’t! Get back here.”

She turns, but slowly. It seems she holds out hope that I’m not talking to her. When we make eye contact, she wanders back toward the house.

Before the epiphany to switch things up, I didn’t use the pressure-treated deck for anything other than grilling from time to time and sitting in one of two 3/4-sized Adirondack chairs that my son built with my significant one’s father—years ago.

Our daughter-in-love stained them with a new coat of dark green three or four summers back. Sometimes, in the winter, I will grab my Solo fireplace, prop it up on some brick pavers, and hold court with no one in particular while watching the flames dance as I wonder about things.

This morning I just sipped my coffee while I looked directly across the divide to the woodline and watched— and listened to— a couple of crows planning their day. The agenda of a crow interests me, and while I don’t speak their language, I’d bet that they were considering where to go for breakfast. I just sipped and avoided butting in.

The cackling drew Ellie’s attention, so it slowed the process of peeing as she became the K9 equivalent of Bewitched’s Mrs. Kravitz on our little patch of a poorly-manicured green oasis. She stood still and looked skyward toward the crow’s lair.

I made some other noise to distract her from the birds, and she finally finished what she had started. She thundered back up the steps in what became a paw-produced drum roll introducing the main attraction. Breakfast!

You see, I pour her mug full of kibble into the light green partitioned bowl before we go outside. I have no method of testing my theory, but she seems more inclined to hustle when she knows breakfast is on the table.

The thunderous upward-moving dog grabbed the attention of the crows long enough to quiet them down, but they stayed put. It was probably still too dark to scan for roadside early bird specials without putting their lives in danger.

Ellie danced a bit on the way to her table. Twice a day, she is overwhelmed with happiness. Twice a day, there is a bowl involved.

I sipped the coffee while considering a future schedule for staining the deck. The crows started back up, becoming louder as the light outside increased.

There is nothing exceptional about rising and trying to shine. Still, there seems to be a consensus among the local population that loud and open communication will make it more palatable for everyone involved.