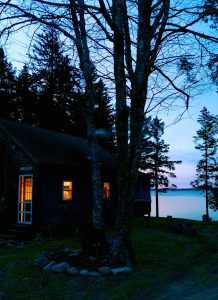 A few weeks of not writing much of anything are good for the soul. Storage of ideas and memories is fuel for a writer of simple things. I am a writer of simple things. Small details, minor incidents, mistakes, and bumps in the road are what keep the writer in me fed. Maybe you come here for that. Maybe you’re merely kind people who want to humor me.

I wrote the following piece during the toilet paper shortage of the Covid spring. I’m recycling because it’s possible that it’s something that the followers of this Newslog have not read. I had run in on my Facebook page.

I retired from police work yesterday. I’m taking a couple of days to ruminate about it. Writing something new—today—would make for a mug of very weak tea. I need to steep a bit. I know you understand. I’ve also got to do an interview with a newspaper reporter today. She’s probably the only one that I trust fully to collect my thoughts. We have talked a lot over the years. When I told her that something was off the record, it was never spoken of again. Not all journalists understand the concept. The Ah-Ha moment is all they are waiting for. Little do they know that there are many Ah-Ha moments when you are trusted, you just need to be patient and keep your word. Enough about that.

This is about a spring moment in the woods near my beloved lake. The FB post included a snippet of sound from the of phonograph player that I speak about.

Thanks for all your support, the notes about retirement, the cards and emails, and even some surprise visits from folks who wanted to meet  before I left the building. What a long strange trip it’s been.

The happy gray camp on the rocky and peaceful point, just a few hundred yards down the boulder-strewn shore from my own, holds a gaggle of neighbors whose privacy I protect as if it were mine.

We all have our private spots, but we also collectively own a large woodlot that acts as a buffer to the loud and clanging world just beyond our small and intimate congregation.

We have a green-robed choir of beech and birch that stand in front of a large alto section of whispering spruce. These choral members are backed up by a rough-barked crowd of baritone hemlocks who cast damp and dark shadows well into a hot July afternoon.

It’s a peaceful place, and we all work hard to keep it that way. We are reverent in the way we speak of our little spot. We whisper, even when it’s not necessary to do so.
It’s that kind of place.

Being one who spends much of his time— alone— in this place, I sometimes wander to one of two other cottages, usually around the dinner hour. It’s a Maine thing. A dooryard visit should come around mealtime, at least, for the visitor.

It serves a man well to identify the sound of a two-stroke outboard motor coming back “down lake” sometime near dusk. For if it is August, and the white perch are schooling up on the north end of the lake, that motor sound soon sputters to silence and transitions to an odiferous announcement that the tiki torch-lit fish fry has begun. Paul and Shirley, Jeanne and Alice, and me, a world-class interloper of the first order.

Thankfully, Jeanne’s daughter, Alice, makes a large amount of pudding for dessert. She invites me to stay because she has made “two kinds!”

The perch is perfectly cooked, and I am told that Alice caught the largest one. These are not fish stories; these are conversations about potholed camp roads, mosquito bites, firewood, and fireflies. We speak of fish caught, but more about those lost at the gunnel.

It’s been some time since we could make it down the road to cottage cove. Winter made it a chore, and an early spring will make it a nightmare. The frozen road will soon turn into a horrible porridge. It becomes a cauldron of coarse gravel, water, ice, and turmoil.

Jeanne and Alice made it in today. I was stunned by her photo of the outhouse seat adorned with a pristine roll of toilet paper. Jeanne indicated that it might be the last of its kind in Downeast Maine. I am hopeful that the squirrels did not make a getaway with mine. I will check soon.

Jeanne continued her pre-spring camp mission with a short video of the family’s hand-wound 1916 Edison phonograph playing the first song of the season.

It was nice to hear and even better to hear on a day like this one. Thanks to Jeanne and Alice for letting us know that there’s gonna be weather, whether or not.

For me, it’s a pleasant note to hear as we finish out another day on the jagged edge of the continent. Take care.

Drop me a line at TimCottonWrites@gmail.com