Reminders to slow down during tumultuous times are evident but often overlooked. We are humanly tuned to look for the next big thing. I was only reminded of this last night when I saw him looking back at me.

I idled in traffic for what seemed like way too long. Staring at the glowing red light holding back my line of traffic kept most of my attention, and I was talking to myself.

A frequent passenger only recently brought to my attention that I tend to grumble while sitting at lights. Before this, I was immune to my sometimes humorous self-supplied banter, but now I hear all of it. It was better in the old days.

As I telepathically transmitted a curse of weeklong traffic jams to those professionals who had timed the lights, I glanced to the right. There he was.

Smugly staring back at me and possibly hearing the things I had been saying through my open passenger side window, his judgment was palpable. I could tell he was enjoying the moment of respite from what was his windblown throne installed in the kingdom of the best day ever. 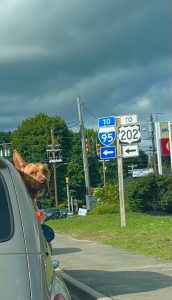 With one ear cocked in my general direction, his opposite furry ear-pan was stowed downward in silent mode. I felt that he was able to block out all other current issues to focus his attention on the mope behind him. He sniffed the air from time to time. But then he would slowly turn his head —as if to pan a camera— back toward me when he determined there were no winds carrying news of current events that might demand his attention.

We locked our gazes in a staredown, but I know I blinked before he did. He wasn’t upset with me, but it was clear that he was also transmitting a message that maybe things weren’t bad at all. The clouds were retreating above us, and the sun was peeking through for the first time that day.

I suspect he was enjoying a break from the rushing wind and tear-filled eyes that always impact his journey, and he wanted a respite from the grumbling heard behind him. A moment of silence from the roar, and the insects, oh the insects, bouncing off his snout. The stop had given him time to think, enjoy, and thrive.

Trips, for him, are never self-initiated. He waits impatiently for all excursions through his kingdom. He’s caged inside until a willing household member takes the jingling keys from the hook beside the door.

He was soaking in this blessed moment in time. I was whining about it.
I got his message. I refocused.

I am pleased to travel— freely— whenever I want. I open and close any windows in my car on a whim. Changing directions is as easy for me as changing the music coming from the stereo. I could stop whenever I felt the urge. And snacks? I could pull in most anywhere for a stick of jerky and a cold Coca-Cola.

Traffic began to creep toward the intersection. The dog turned his attention to what lay in front of the car— to what was next. Sure, there was a chance that the driver would roll up his window at the wrong moment, and his human would always supply his supper on their personal timetable, not his. Still, this was his kingdom, and he would reign supreme for at least a few more miles.

I backed off a bit as we got up to motoring speed. He paid no further attention to me, the mortal behind him. His ears were slicked backward by the slipstream, and he focused on the here and now, delivered to him by a thirty-two-mile-per-hour breeze.

Accepting—maybe embracing— circumstances beyond his control had changed me, at least for a short time. I learned a valuable lesson from the dog right in front of me.

Thanks for reading my stuff, preordering my next book, and for your support for the newslog through the BMAC app. You folks keep this train running, and I appreciate it.

From the Jagged Edge, I remain,
TC